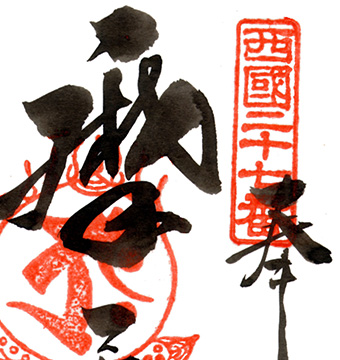 Go-shuin are written by a priest or a staff member of the temple in the applicant’s Go-shuin-cho (a special notebook used only for this purpose). The names of the temple and the principal image are written in traditional Chinese characters or ancient Sanskrit language along with the date and other sacred words, and a vermilion seal is affixed to them. There are several different theories regarding the origin of Go-shuin and the most widely accepted theory is that the certificates were issued to pilgrims who had completed the copying of the sutras. Different from memorial stamps, Go-shuin must be treated with reverence and respect just like talismans and amulets.

The Go-shuin of the 33-sacred Temple Kannon Pilgrimage Route in Saigoku are issued in the applicant’s Go-shuin-cho at Mani-den for JPY 300. To applicants who do not have Go-shuin-cho, Go-shuin is issued on a piece of paper of the same size of Go-shuin-cho.

back to page top

Known as one of the most revered sub-temples in Engyoji Temple, Juryo-in was once called Muryoju-in. The records show it was visited by Emperor Go-Shirakawa in 1174 (Joan 4th yr) after his retirement and entry into the Buddhist priesthood.